skip to main | skip to sidebar

The ghost who walks. 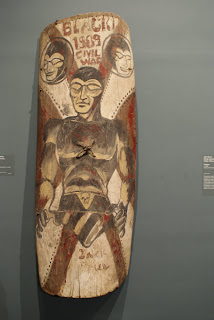 Phantom Shield c. 1970
Wahgi People
Wahgi Valley
Western Highlands
Papua New Guinea
Synthethic polymer paint and enamel on wood
This is one of a collection of Phantom shields held by the National Gallery of Victoria-International Galleries.
This shield represents the crossing over of two cultures - 1970's comic book culture with traditional life in the Western Highlands Province of Papua New Guinea.
At the same time that Andy Warhol and Roy Lichtenstein were appropriating popular culture into large scale artworks, the Wahgi tribal people were appropriating comic book culture onto traditional tribal shields.
Did the Wahgi people know that this type of artisitic practice was occurring half-way across the world? I think not.
My thought is that the Wahgi people were celebrating a comic book icon in the best way they knew how - by painting on a tribal shield. And what a celebration it is.
Photo taken by mrsmatthews-artteacher.
Posted by Mrs Matthews at 12:05 AM